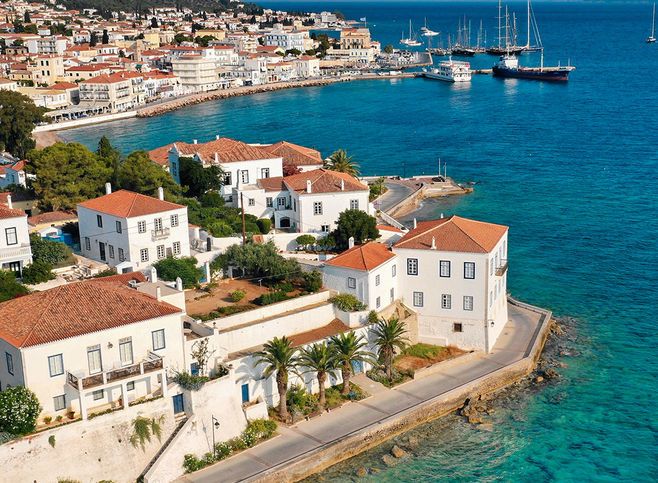 Heading south from Athens, we'll encounter destinations such as Spetses, Nafplio, Astros, Tyro and Leonidio/Plaka, Kiparissi, fjord of Yerakas, picturesque fishing villages that we approach, with views of the Myrtos Sea. A little before we reach the southernmost edge of the eastern Peloponnese, you’ll face the Monemvasia rock.

The eastern Peloponnese coast south west of Poros is a spectacular mountainous wall stretching south-south east from Astros to the towering Cape Malea. It is rugged, wild and sparsely inhabited, with only seven small harbours in sixty miles of coast. Down here, in the provinces of Arcadia and Lakonia you see the same untouched scenery as Odysseus.

The sailing area of the eastern Peloponnese described here extends from the southern end of the Argolic Gulf down to the south western tip of the Peloponnese at Cape Malea and on around to the island of Elafonisos and south to the island of Kithera. Our two-week sailing proposal South-Eastern Peloponnese sails much of this region as well as the Argolic Gulf area, so if you are considering this experience it is worth reading the details for both areas.

The South eastern Peloponnese sailing area includes the Laconic gulf and extends down the eastern shore of the Peloponnese to Cape Malea in the far south, and Argolic Gulf to the north The northern part of the sailing area is therefore the Argolic Gulf which is well protected from the summer 'Meltemi' wind that blows from the north/north easterly As we are heading south towards Monemvasia, we gradually leave the shelter of the Argolic Gulf and enter the more exposed south eastern Peloponnese which can experience more of the 'Meltemi' wind. That said, it's also possible to sail (well, motor!) to Monemvasia in a flat calm, so it is more a case that if the 'Meltemi' blows, then you can be more exposed, but by heading north again you can tuck back into the shelter of the Argolic Gulf, Hydra and Spetses.

The eastern Peloponnese coast is a place of quiet unspoilt villages and anchorages. You will find waterside tavernas but you will be well away from large towns and the noise of all-nights bars and discos. If you look for peace and natural beauty, this is the area for you. Please note that waypoints are provided for identification purposes only and represent good ‘stand-off’ locations. However, they are not intended to be used for navigation.

This has become a new stop since the mole has been extended providing good shelter. It is worth the visit for the friendly restaurants and the charming village on the hill.

Nafplio, the capital of the prefecture of Argolida and the first capital of Greece, is a picturesque city with a significant history and deeply rooted cultural traditions. Built at the foot of two forts, Palamidi and Acronafplia, today it has a population of around 19,000 inhabitants and a growing tourism. Nafplio is a neoclassical 19th century city with great tradition and centuries of history. Nafplio combines a set of images that fascinates visitors. The main source of income is tourism as it is a popular destination all year round. The city operates a commercial port that exports mainly agricultural products of the hinterland of the county.

A Glimpse of the Past

According to mythology, the city was built by Nafplius, son of Poseidon and protector of the city Nafplio. During the Mycenaean period, the city flourished into one of the strongest naval powers of Greece. During the Neolithic period, Nafplio became an ideal place for settlers because of its position. 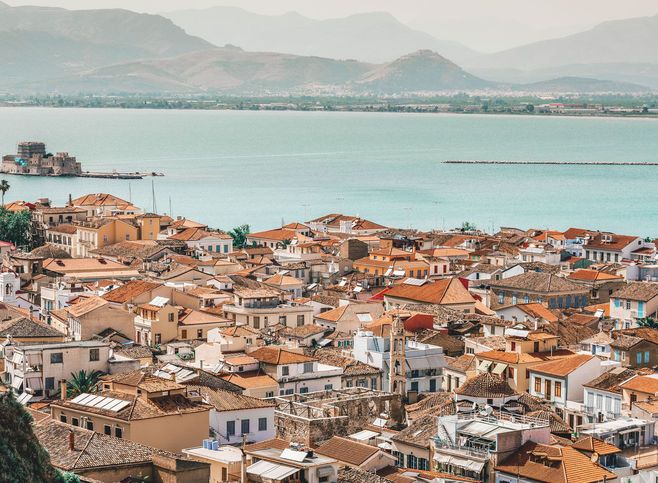 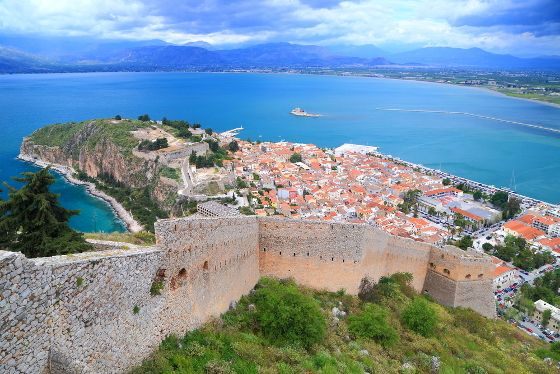 It had access to maritime communications, but most importantly, the steep rocky slope of Akronafplia protected it from any intruders. At the beginning of the 7th century BC the city of Nafplio was a founding member of the State Union of Kalavria and shortly thereafter, it was referred to as a mighty seaport of Argos. According to the reports of Pafsanias, who had visited the area, the city was nearly abandoned during the Roman era. It is believed that the name Nafplio or Anapli was given during the Byzantine period when the city was the core of a Byzantine domination. During that period, a very important figure was Theodore Sgouros, the ruler of Nafplion from about 1200. During the Middle Ages, the city experienced the rule of the Byzantines, the Venetians and the Franks. In 1388, the city was under the Venetians’ occupation. The new rulers of the city reinforce the fortification of the city. Two fortresses were built on land, Akronafplia and Palamidi, and a third in the Bay Nafplias, Bourtzi. Even in this day and age, these three buildings were viewed as monuments, which gave the city its character. In 1540 the city surrendered to the Turks and many Greeks were made to leave their hometown. In 1686, the Venetians, led by general Francesco Morosini, managed to re-take the city until 1715, when the second and harsher occupation of the Turks began and lasted until 1822. Nafplio was the management center of the rebel forces during the Greek Independence War in 1821.The first Greek Constitutions were formulated in the nearby areas of Epidauros and Astros during the first two years of the revolution. On November 30, 1822, Nafplio is finally liberated from the Turks. Staikos Staikopoulos seized Palamidi and three days later the Turks turned over the city to Kolokotronis. The seat of government was gradually moved to Nafplio. Over time, the city got back its important role in current events. On May 4th 1827, the third National Assembly defines Nafplio as the official capital of the country. A year later, Ioannis kapodistrias comes to Nafplio. The 3rd National Assembly appointed him as governor for 7 years. However, before completing his term, Kapodistrias was assassinated in 1831, outside the church Agios Spiridonas. His most important goal was the rebuilding of the military and navy, which he succeeded in doing. He also managed to expand the boundaries of the country in mainland Greece. Kapodistrias built the first Greek schools and reorganized the corrupt legal system. Ultimately, the governor made serious efforts to strengthen the agricultural sector and cut the first Greek currency the phoenix (Finikas). In 1833, the people of Nafplio welcomed Otto, the first king of Greece. He remained in Nafplio until 1834, when the capital of Greece was moved to Athens. It is worth noting that, in 1862, riots against Otto broke out and led to the exile of the king.

This is a must; Plaka harbour is situated under impressive rocky slopes and boasts a mile long beach with tavernas selling dishes sourced from the local market gardens. It is the port for Leonidhion which is situated four kilometres inland on the floor of the valley and is the capital of the region. Leonidhion is an untouched Arcadian stone town and worth a visit to see the beautiful traditional stone houses and the spectacular landscape that surrounds it. Nearby is the spectacular convent of Mount Elonis. Leonidhion Plaka counts as one of Rob Heikell's top six favourite spots in Greece (Sailing Today, issue 136, August 2008). 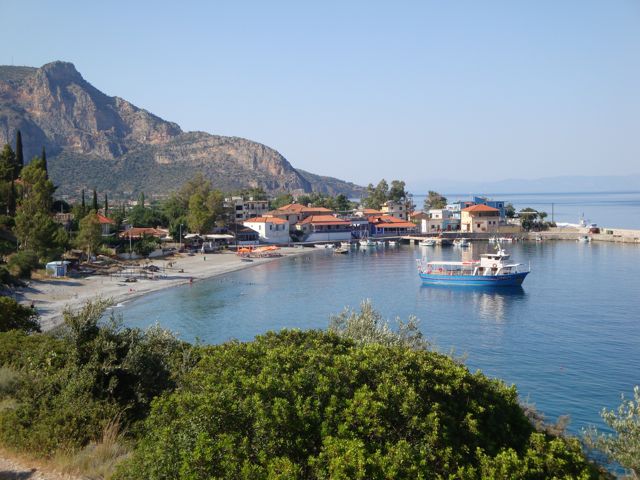 Kiparissi is situated in a spectacular bay surrounded by steep mountains that provide good sheltered mooring from all but north easterly winds. There are three quays; town quay, chapel cove and the north west quay, each appropriate for sheltering from a different wind direction. The village has several tavernas and basic provisions can be found.Between Kipirissi and Yerakas there are some wonderful anchorages providing the weather is calm. 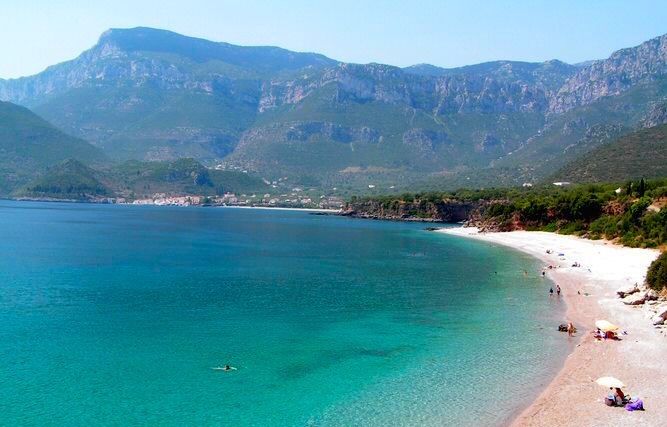 Yerakas is something really different; a totally protected fjord opening out into a (very) shallow inland salt water lagoon. It is an enchanting little place with a couple of excellent tavernas along the water’s edge. There is a small shop under one of the tavernas. It has limited opening hours and even more limited stock. On the northern point of the entrance are the ruins of an acropolis dating from Mycenaean times which sit above Kastro (Castle Point).

‘The Gibraltar of the East’ and a must-see destination for any sailor. We anchor at one of the marinas and head up to the medieval fortress. Within its walls, we’ll find one of the best-preserved castles in Greece, which attracts visitors from around the world all year long. The view from our yacht is particularly impressive, with the majestic grey rock and its castle towering above you. With plenty of places to eat and drink, we recommend we stay overnight at least. It will leave you remembering it as one of the most impressive places you have ever visited. A day for exploration and relaxing in the excellent restaurants and wandering the streets and shops. The colossal rock has the remains of a Byzantine town spread across the top and a medieval village tucked onto its southern side. To enter the village is to take a step back in time. A causeway joins it to the mainland town of Yefira where the harbor is situated. 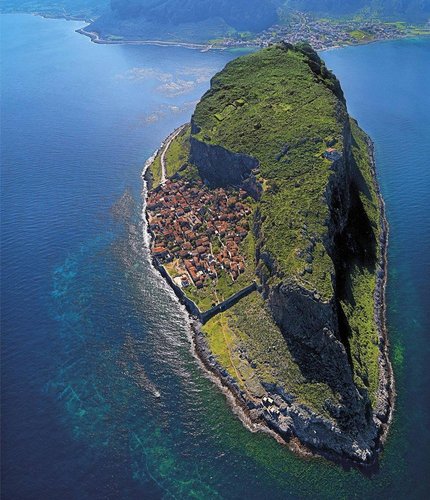 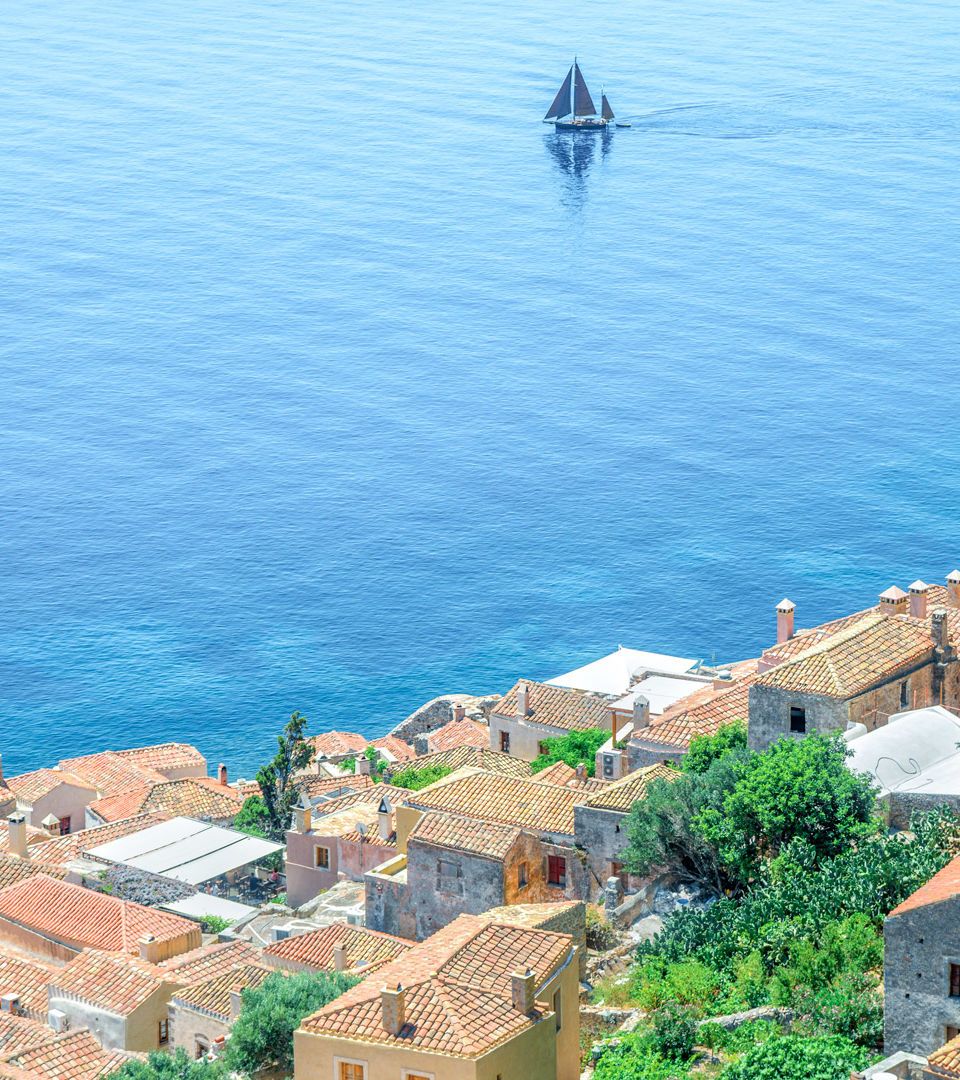